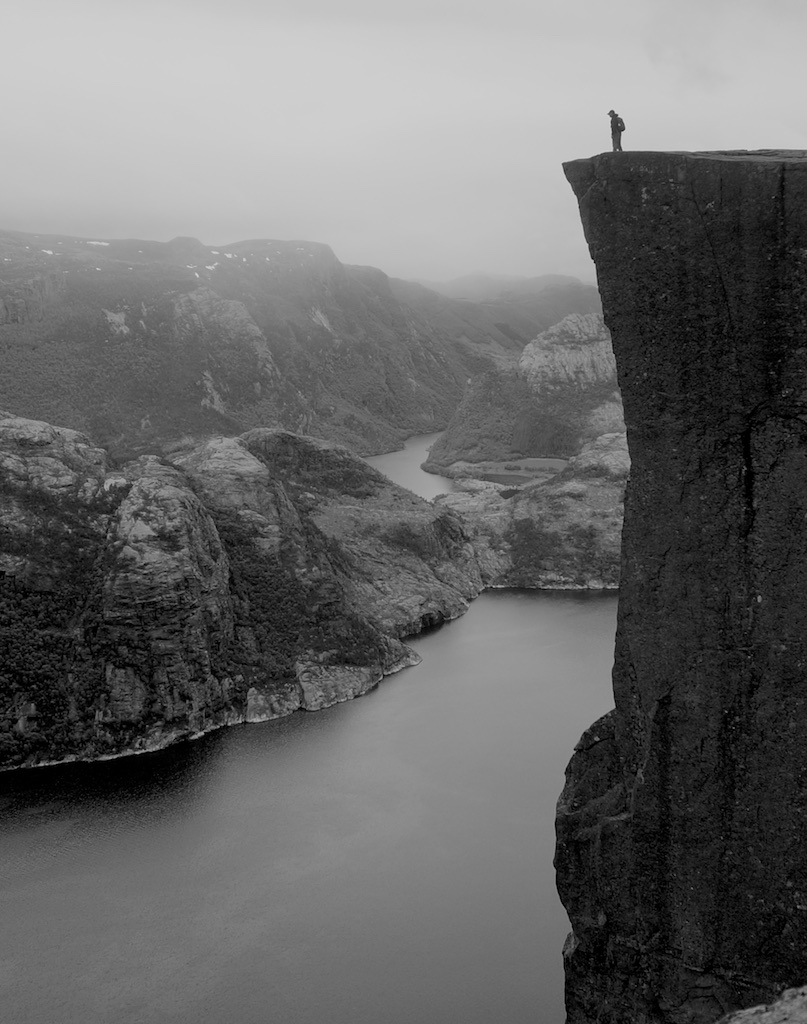 I’ve had a fascination with Norway for years dating back to LooseGrip’s early work with Norwegian company, TANDBERG. It is generally considered one of the happiest countries in the world, their citizens have the highest standard of living worldwide, heck their mass murders live like the %1. So following a biz trip to London, I took a cheap flight from LHR to SVG and met my buddy Adam who’d been working in Denmark.

After rendezvousing at the small airport in Stavanger, we grabbed our rental car and hit the road towards Preikestolen, or Pulpit rock. First impressions: Norway knows how to build a road, they’ll put you on a giant ferry even if it is empty and all things are very expensive.

Preikestolen is considerably more popular than the other big hikes we did on our trip due to its proximity and length. You’ve probably seen it with featured with inspirational quote overlaid on it and shared by a very uninspiring friend on social media.

We intended to get up first thing the following morning to avoid the crowds but arriving late afternoon and realizing that the sun stays out until 10pm this time of year, we chose to hit the trail that day.The hike is much closer to the sea than the others we did during the week, so the temperatures are a bit more mild given the gulf stream’s mellowing of the climate in southern Norway. But given the pouring rain and the later start time, we had the trail pretty much to ourselves heading up. The views along the hike itself are epic by any standard other than Norwegian with numerous waterfalls, lakes and view points, but the real payoff would come at the pulpit itself.

As you crest the last ridge you get a side glimpse of the Fjord, and the sheer drop 1,982 ft that leads down to it. Pictures and numbers don’t do it much justice, but for reference imagine:

While the later hikes in the week were probably more dangerous, I personally found the Preikestolen to be drastically more panic inducing. The sheerness of the drop means you can’t really appreciate it until you are laying on the edge, looking straight down a couple thousand feet.

After an hour or two, you actually begin to feel a bit more comfortable near the edge and enjoy the view, or perhaps a beer you brought just calmed that instinct to flee enough to allow you to relax and take in the view.

If you’re lucky enough to go, a few recommendations: