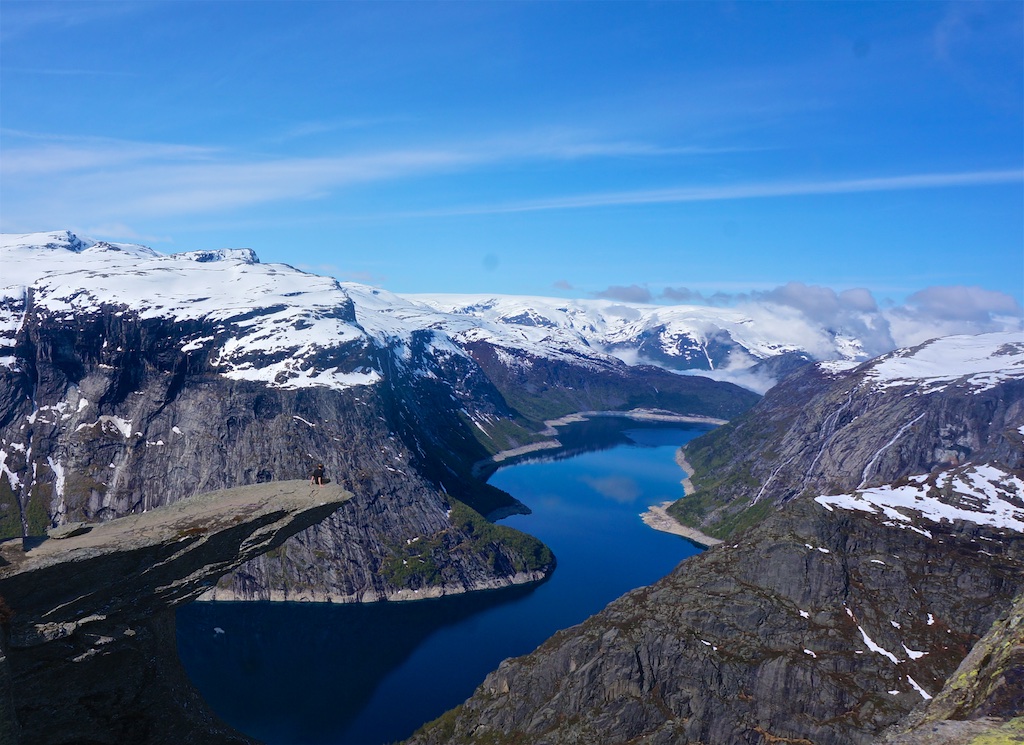 Mindlessly scrolling through my Instagram feed, I came across an image that stopped me in my tracks. It just so happen to be Trolltunga, or the Troll’s Tongue. I’ll admit that a good portion of my motivation for heading to Norway at all was just that one photo, overlooking what seemed to be photoshopped lake. At the time I had no idea that there was even a hike involved. And a hike it was. 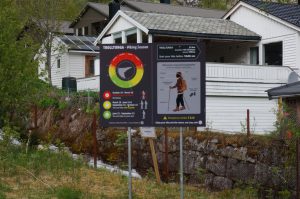 We woke at 5am to with the intent of beating the crowds with an early departure; and since technically the hike is closed for another month or so (June 15) unless you plan on using snowshoes or skis we figured the crowds would be light.

The hike begins 2,000 or so feet of elevation within the first 1k or so along a massive waterfall. It’s a brutal start, and makes for a more brutal end. It’s only about 11k from the parking lot to the tongue, but the first 1k really helps you understand how brutal that’s actually going to be. That is also about the time you realize that any chance of having dry feet are over. Also, sun block would have a been a strong move.

At about 2k we came to the snow line as we approached the first ridge and the final signs of civilization. During the next hour our so, the weather improved and the temps rose quickly up to 60(ish). Having had nothing but rain for the last two hikes, the sunshine was a welcome respite. Temporarily.

It turns out at 40 or 50 degrees we were able to remain on top of the snow sans snowshoes. But as the temp increased, so to did the frequency of our postholing. Put short, postholing is when deep snow is too soft  and can no longer support your weight and you drop knee or hip deep when taking a step. By the hike back I’d guess we had a serious drop once every 10 steps or so, but outside of crawling (or having proper gear) there really isn’t any way to avoid it.

Postholing aside, the views continued to improve as we approached our first sight of Ringedalsvatnet, the glacial lake that the Trolltunga juts out over. The views are impossible to describe, and pictures don’t do much justice but the sheerness of the cliffs and seemingly photoshopped bright blue of the water is such a stark contrast to the snow covered mountains that almost doesn’t seem real.

About 5 hours of non-stop hiking later in we rounded the last turn and climb up to the tongue itself. Eerily, there was a tent (empty), and some climbing gear lying around near the top, but no owners/bodies were to be found so we chose to assume they decided the gear must remain affixed (or something). We were told that on busy summer days you might have to wait 1-2 hours to get out on to the tongue to get your picture. Lucky for us we hadn’t seen another human in all day, so we had the place to ourselves.

To get on the actual ledge you climb down a few metal hand holds, and out onto the rock itself that sits some 2500 feet above the water below. After a few minutes the vertigo begins to subside and I actually found it to be more relaxing than Preikestolen. The tongue itself is bigger than pictures allude which allow you out on it without needing to be right on the edge, and while you are on it you aren’t really aware that there is very little rock beneath you and death.

We relaxed for a good hour out on the actual tongue and had lunch while giving our feet a respite from the snow soaked shoes. After getting plenty of token pics (well plenty of Adam that is, since he and photography don’t get along so well), we began the slow posthole bonanza hike back, and encountered the first other humans about 1k into the return hike.

Having achieved the goal of avoiding crowds and beating the weather, we took it slow on the way back and stopped a bit more to enjoy the views with a beer at the top of the last ridge. The hike back is easier but by no means all downhill.

We passed a few groups on our hike back, half who were way more prepared (snowshoes, skis, guides) but plenty who were seemingly more unprepared then ourselves (jeans) many of whom didn’t seem likely to make the push all the way out.

All in all, one of the more epic/rad/hard/superlative filled days of my life. Go check it out before the tourists take it over, or another accident causes them to surround it in warning and fences like we’d do in the states.