On January 1st 2020 at 7am or so 2 year old daughter, Lida had a very serious seizure. She has has had a few every year, but this was the worst we’d dealt with. As in – emergency meds not working, fire trucks and ambulances all over our street bad. We’d had friends over with their kids the night before, so it was as late of a night as we have anymore. We were all rough around the edges. Not to mention Laura was 5 months pregnant. We spent the bulk of the first day of 2020 in the ER.

I’m lucky though. It was a serious and scary AF no-doubt. But on the scale of epileptics, Lida is fortunate to only have a few seizures a year. Lida (and I) are lucky again to have a built in healthcare provider in our home, and she has an ability to remain calm when I want to freak the fuck out. We’re lucky again to live ~1.5 miles from Golisano Children’s Hospital, and in a place where EMT’s show up in 5 minutes if you ring 911.

Modern healthcare is not easy to navigate. We are fortunate that we are both educated, entitled Karens when it comes to our child’s care. (“call your MF manager nurse Cheryl.”) Laura speaks hospital fluently which means we often convince them to do less, not more. And money never entered into our head (OK, it did enter my cheap ass head that we’d likely already met our deductible in 2019 if this shit had happened 12 hours before.) 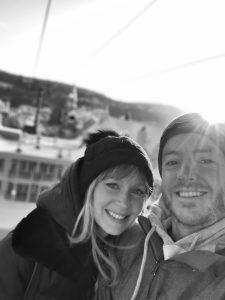 later, Laura and I had a big trip planned to Kauai, sans-kid. And while Lida was back to herself within a couple of days, we were not quite ready to be 20 hours of travel away from her.

A week or so out, we canceled our trip. Assuming we’d be able to push it to later in the year.

I’m lucky though. With time off already booked Laura and I decided to to a driving-distance getaway. Mont Tremblant in Quebec. It was one of the best trips we’ve had. We frolicked in the snow, ate our weight in poutine and generally lazed around in a heated pool.

LooseGrip had a rough start to the year.

First, losing one of our core team members to another gig. Just weeks later, we had to part ways with a big client who was violating a key LG policy (read: we don’t work with assholes). All right before the pandemic set in full steam and clients began to hold budgets tighter.

We had a big pitch get pushed to virtual in mid-march and it didn’t go well. Our dog-and-pony just didn’t translate to virtual, and I flopped.

I’m lucky though. We don’t count ourselves amongst those who’s business or job or industry was devastated. Business remained steady for us, clients looked to us to help them pivot their businesses. We’ve been a fully remote team since day 2009, so this new way of working, was just our way of working. We’ve brought on two new people in 2020 that we may not have been able to snag in 2019. We put our heads down and carried on.

In late March, we were informed that Lida’s preschool (which we loved) had received numerous complaints about an abusive teacher. One of the incidents involved her. While the incident didn’t seem to ever put her in real physical danger it was enough to make us question everything we thought about our choice in childcare.  While getting interviewed by child protective services at our home, Lida had another seizure. While they were literally at our home. You can’t make this shit up.

I’m lucky though. Schools all closed shortly thereafter anyway. And just blocks down the street there would be an opening for her once once the world opened back up.

By April, we were not super excited about Laura working 24 hours shifts on the labor floor while 9 months pregnant with covid raging throughout the hospitals, still without much in the way of PPE.

I’m lucky though. Her employer rallied to help her do her last month of  pregnant work via tele-med and we tag-teamed hanging with Lida between calls.

On April 25th, we headed to the hospital for a COVID-era child birth.

No guests other than me, temperature checks to get in, no leaving the room. In other words, a child birth environment with the tranquility of LaGuardia. 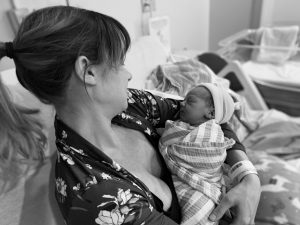 He was healthy. Perfect. They gave us a hospital steak dinner. We were home to introduce him to his sister, and his pop-pop (via car window) just a day later. We spent the next few weeks practicing full quarantine and caring for two kids while trying to work (which would come in handy).

Rochester, was hit hard by protests and unrest.

Mostly peacefully, but rioting was real as well, just blocks from our home. I had momentary glimpses of the fear that drives people to move to the ‘burbs.

I was especially sad when one of our favorite restaurants got lots of attention for getting trashed during a protest, right after they had voiced support to the protesters as a safe space for anyone that needed it. The local, and national media really had the fear machine cranked up and my doom-scrolling was at fever pitch.

I’m lucky though. We live in a city where the immediate response was not to demonize protesters, or BLM. That favorite restaurant that got trashed? They quickly responded that they were still here, and still supporting the fight against injustice. We love them more than ever. 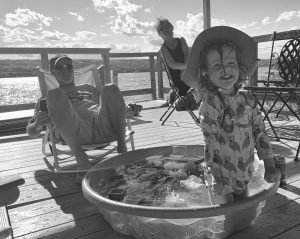 I’m lucky though. we live just 60 miles from our family lake cottage. We spent the bulk of Laura’s maternity leave hanging lake side with a couple of kids and lots of family.

The week before Thanksgiving, we made the tough call not to see any of our family over the holiday. Case counts were really high. It didn’t seem smart to put our parents and families at risk. If anyone was going to stay home, it was us right?

I’m lucky though. It may have been the move that may have prevented infection. We had a wave of sickness starting the day after thanksgiving. And within a week, Shea had tested positive, meaning more of us likely had it. We narrowly missed spreading the virus to our families and friends — not just in theory, but in reality.

As I write this, we are in week three of isolation.

LooseGrip’s team retreat should have been in person a couple weeks back, somewhere amazing. Gyms have been closed. We’ve had no human contact with the outside world in almost a month.

I’m lucky though. Shea has rebounded. I either didn’t get it, or was asymptomatic. Vaccines are here. We have a big ole house to try to find some solitude to get work done. We have a home gym to keep us sane. Grocery delivery and awesome takeout spots to keep us fed. (Delivery cocktails FTW). Laura and I manage to help each other stave off cabin fever with take-out date nights and virtual reality googles.

The terrorist that was the last 12 months was real.

However, feeling sorry for myself feels good for about 2 minutes. Feeling grateful has a longer half-life. Our reality is just that, our reality. Many had it easier. Many had it far worse.

I’ll keep trying to be amongst those who know well enough to find contentment with whatever their version of lucky looks like. 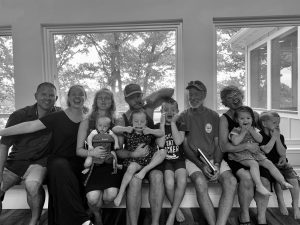 Looking back at how the year stacked up vs. my goals for it was comical but still, results below:

About my annual review: For the last 9 or so years, I’ve tried to look back at the year before and see how it stacks up, while also setting goals for the year to come. I find the exercise invaluable as a mechanism to be inspired to do more cool stuff. As categories  Life, Fitness, Business & Travel work best for me, but if you’d like to do your own I recommend checking out my buddy Chris’ Template to get started.